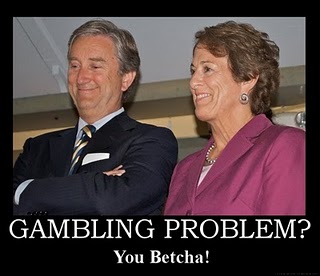 If I ever get in a jam, I ask for no special treatment. Just treat me like a Democrat, like the wrinkly wife of a moonbat congressman who worships the ground Nancy Pelosi and her Botox walk on.

Treat me like Patrice Eremian Chew Tierney, aka Mrs. John Tierney. Gets indicted for laundering millions in ill-gotten gains for her brother, a fugitive gangster, and when she gets caught, she tells the judge she’s depressed and gets fined $2,500.

Think about it – a working man in Reading was just hit with a $2,000 fine for the crime of having no dough to buy himself and his family some RomneyCare health insurance he didn’t need. Now that’s a serious offense.

Two months ago, Christy Mihos was caught using his own personal funds in his campaign for governor, as well as filing late reports. The fine: $70,000.

Question: what’s the big difference between Mrs. Tierney and Mihos?

Mrs. Tierney is a Democrat. Thus, when she launders $8 million in ill-gotten gains, a criminal offense (at least if you’re a Republican), her penalty is a paltry $2,500 fine (plus those hefty $400 court costs). Nothing to see here folks, move along.

And what does John Tierney say on behalf of his felon wife?

I’m reading the federal indictment of the Eremian gang last summer, and there’s a list of wire transfers Eremian, the Armenian Whitey Bulger, made to his sister/laundress:

They must be the only married couple in the world that never talks about money, especially big chunks of it.

This is from the feds on Page 7 of the Eremian mob’s indictment: “Approximately $8 million was laundered through these U.S. bank accounts.”

Nice district, the 6th. The previous Democrat congressman was Nicky Mavroules, Nicky Pockets. He ran his office as a racketeering enterprise – that was the first line in his indictment. He used his son-in-law as his bagman, and they used a code in which a $5,000 bribe was “five bottles of wine.”

What a piker Pockets was. Patrice laundered 8,000 bottles of wine for the Mob.

Henceforward, John Tierney is known as “Johnny Pockets.” When the words “Nicky Pockets” and “racketeering” began to be used in the same sentence back in 1992, the voters threw Mavroules under the bus. Let’s see if they can do the right thing 25 days from now.