The Phantom Menace and the Cauldron of Corruption 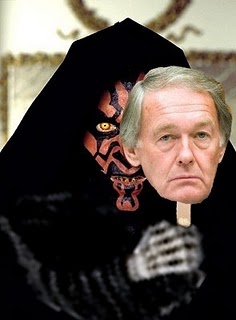 OUR WARS : EPISODE 1 : THE PHANTOM MENACE

“Currently in a Democracy very very near….”

“Turmoil has engulfed the Republic.

Corruption and excessive spending by the leadership has become commonplace. The best interests of the citizenry have been repeatedly ignored, their common sense mocked and sensibilities abused.
Seeking to further dampen the will of the people, the greedy Congressional leaders repeatedly pass laws without the consent of the governed. While the Congress of the Republic endlessly abuses its power and further pushes this alarming agenda, the citizens have boldy risen up to settle the conflict…”
With all due respect to Darth Maul, there is one congressional figure whose actions have epitomized the unethical, immoral, and until now, invisible goings on in Washington DC. For 34 years Ed Markey has flown under the radar, repeatedly being re-elected to serve a district that he neither lives in not cares about.
Mr. Markey has come to epitomize everything that is wrong with the system, amassing a small fortune in campaign contributions from the very firms (and individuals of those firms) and special interest groups he is charged with overseeing.

For example, Ed Markey currently chairs the Energy and Commerce committee. A closer look into his donations by the related industries leads one to seriously question whether or not Ed Markey is influenced to pass certain bills and set aside particular earmarks. At minimum, there is a clear and undeniable conflict of interest.

Here are just a few examples that can’t help but make one wonder whether or not Markey is a key component of the “pay to play” schemes that we all fear are happening in Washington.

The following is paraphrased from the article titled Caldron of Corruption now up on Gerry Dembrowski’s website at http://gerry2010.com/news/2010/10/cauldron-corruption:
General Electric is one of the largest companies in the world yet they received a $25M grant from the Stimulus Package to create jobs only to have them lay off 18,000 workers. (See http://www.mediaite.com/online/bill-oreilly-suggests-ge-received-stimulus-money-as-payback-for-nbcs-support-of-obama/)
In August of 2009 leaked emails from GE show how the company would financially support Waxman-Markey for Cap and Trade (See http://www.washingtonexaminer.com/politics/How-GE-puts-the-government-to-work-for-GE-8154266-54820577.html).
Markey along with several democrat leaders such as Pelosi and Waxman received thousands in campaign contributions from GE. (Please refer to the “Ed Markey donor list on Gerry Dembrowski’s website here: http://gerry2010.com/sites/default/files/Markey%20Donor%20List.pdf)
The question Bill O’Reilly asks is, “Why would we give GE $25 million in the first place when they’re generating an enormous amount of money. They don’t need stimulus package.”
Earmarks have long been a concern of the deception and waste that takes place in Congress. This past year, questions over Ed Markey’s $32M earmark in defense for the Ted Kennedy Library received the most notoriety since it had nothing to do with the defense of our country.
At closer examination of Ed Markey’s earmarks however demonstrates how political contributions directly influence earmark appropriations to companies.

Raytheon received a $4M appropriation thanks to Ed Markey. Ed Markey in turn received thousands in campaign contributions from Raytheon and its executives.

Thermo Fisher Scientific received a mere $800,000 and Ed Markey receives thousands from that company and its executives.
(Please refer to the link titled Ed Markey’ Earmarks on Gerry Dembrowski’s website here http://gerry2010.com/sites/default/files/Markey%20Earmarks%202009.pdf)
Ed Markey and his fellow Corrupticrats have shown us exactly who they are. It is time to restore honesty and ethics in Congress and and it is time to return control of it to the people.
Sam